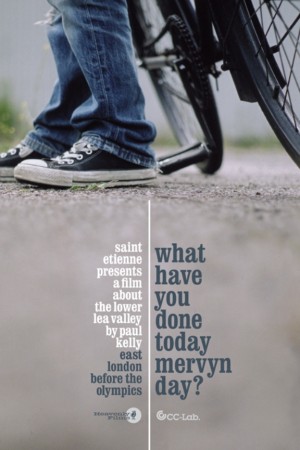 Heavenly Films are pleased to announce the DVD release of What Have You Done Today, Mervyn Day?, Paul Kelly and Saint Etienne’s classic depiction of London’s lower Lea Valley before it was redeveloped to become the Olympic Park.

After their 2003 feature debut ‘Finisterre’ Paul and the band were commissioned by the Barbican in 2005 to direct a creative documentary with a live soundtrack. The film beautifully captures the east London site – its winding overgrown canals, and derelict warehouses – before the developers and bulldozers moved in, before the birthplace of plastic and petrol was changed forever.

Released as a limited edition of 1500 copies …Mervyn Day is presented as a double disc set which includes a DVD of the film itself plus a CD of the original soundtrack composed and performed by Saint Etienne. Also included is a lavish 16 page booklet with stills from the film and an essay about it’s making by Bob Stanley.

Tweet
Back to the News page
← I’ve Got Your Music – the video!
On The Road Again →