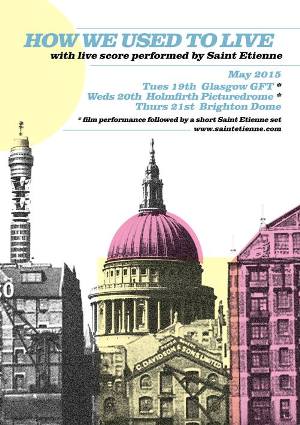 Following sold out performances of the How We Used To Live soundtrack at the Barbican Centre in London and Sheffield Doc Fest, Saint Etienne take the film on the road with a mini UK tour in May.

The film will be accompanied by a live score performed by a seven piece Saint Etienne line-up including Sarah Cracknell, Debsey, Pete Wiggs and Gerard Johnson.

The performance at Brighton Dome on Thursday 21st of May forms part of the Brighton Festival in will include the film only (70 mins) with no band set.
Tickets are priced at £16 and £18.50 and available here:

The Holmfirth Picturedrome performance on Wednesday 20th is part of this years Holmfirth Film Festival, situated in the beautiful countryside of Yorkshire’s Pennine Hills. The film will be followed by a short 7-8 song Saint Etienne band set.
Tickets for this event are very limited and priced at £20 here

The three date run commences in Glasgow on Tuesday 19th May at one of our favourite cinemas, the GFT. Once again the film will be followed by a short 7-8 song band set.
Tickets are priced £20 and available here