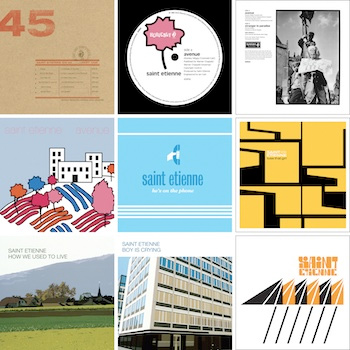 You may be vaguely aware that both Bob and Pete are vinyl junkies and are rarely to be seen without a small 7″ shaped box when they are on dj’ing duties. It made incredibly good sense that, for 2011 Record Store Day, we should release some of the St Et singles that didn’t come out on 7″ the first time round. So…

The box, we’d like to think, is quite beautiful, designed – as is the insert – by Paul Kelly. And the pressing quality is top notch – mastering by the redoubtable Guy Davie.

Having had fun in Singapore we’ve decided to book up a few more live dates; this time were heading off to Scandinavia for a short trip that takes in:

And don’t forget we’re playing in London at KoKo on Saturday 30th April too!

Now we’ve filled your diary and emptied your wallet, back we go into the studio. We’ll be playing a handful of new songs at KoKo and in Scandinavia so you can keep tabs on our progress.