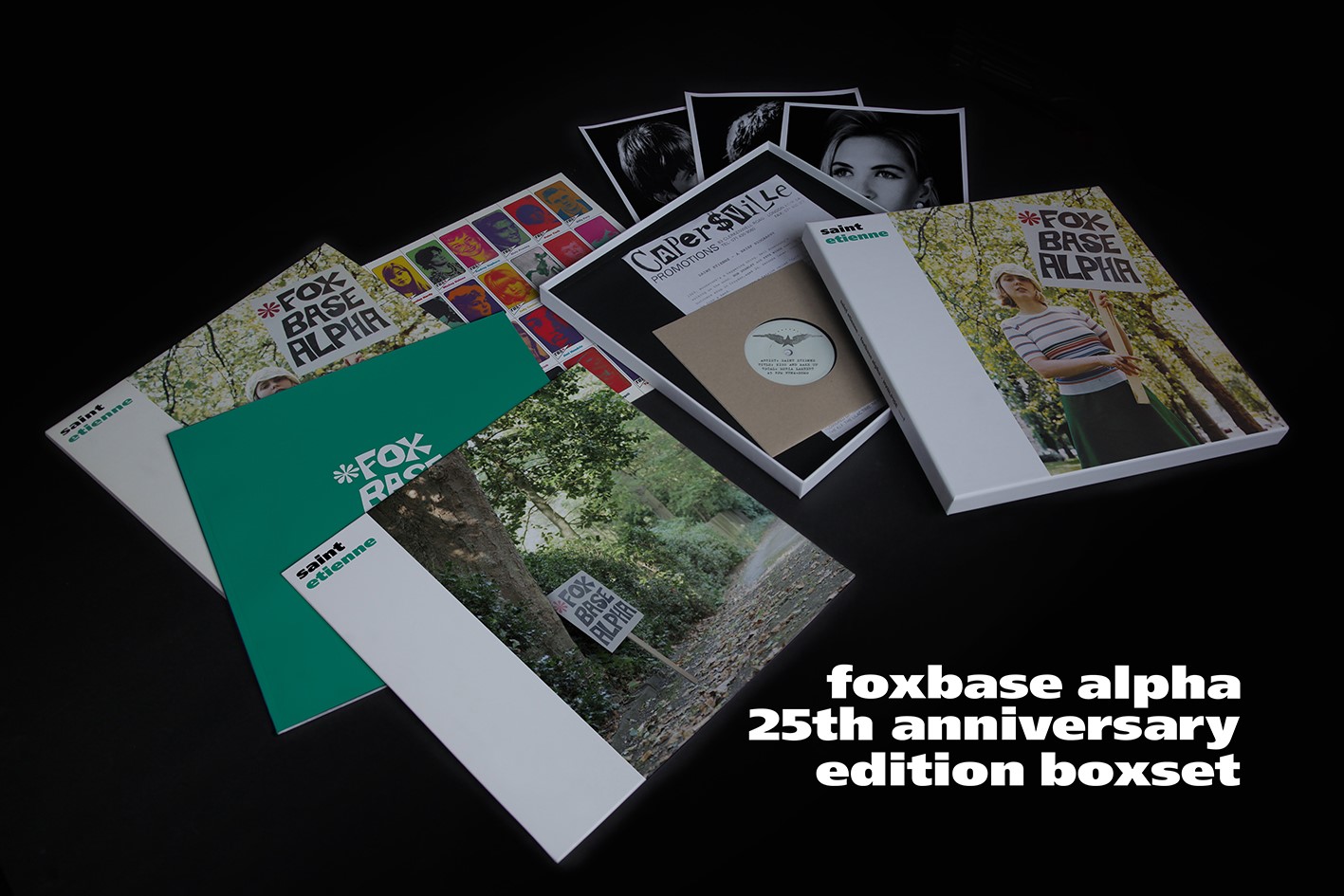 “And now ladies and gentlemen, what you’ve been waiting for!”

Finally we can bring you news on the 25th anniversary re-issues for ‘Foxbase Alpha’.

It’s hard to believe that a quarter of a century has passed since our debut album first appeared in record shops and we hope you’ll like what we we have on offer to celebrate this special anniversary.

An exact replica of the original Heavenly pressing from 1991 – resplendent with full colour inner sleeve and a digital download code for the music. Available to purchase from all good record shops and via the Saint Etienne webshop (click here) – for immediate shipping – from 5pm UK time this Thursday 27th October.

• The original album remastered and cut onto two twelve inch 45rpm discs for higher fidelity, housed in an exclusive gatefold version of the original sleeve.
• Remains Of The Day, an exclusive album that gathers together ten rare Foxbase Alpha-era recordings from the period most of which are appearing on vinyl for the first time.
• An exclusive one-sided 7” featuring the original, previously unreleased version of Kiss And Make Up, featuring Only Love Can Break Your Heart singer Moira Lambert.
• A perfect bound, 12″ square, 28 page book featuring many unseen photographs and artefacts from the era, plus a new interview with Bob Stanley by the Guardian’s Michael Hann.
• Three 10”x 8” black and white portraits of the group.
• A perforated sheet of Foxbase Alpha trading cards.
• Exact reproductions of the original album press release and biography.
• A digital download code for all of the music.

All items included in the box are exclusive and won’t be available elsewhere .

The box set can be pre-ordered at £50 (plus postage) from the Saint Etienne webshop (link below) from 5pm GMT this Thursday 27th October. Please move quickly as we’re expecting these to sell fast*.

Due to lead times we have been advised that this item will not leave the factory until December 14th. We are doing all we can to bring that date forward so we can ship orders in time for Christmas but there is a strong possibility that orders will not ship until the first week or so in January. We’re sorry for this but wanted to ensure the contents of the box were the best quality possible.

Last but not least we’ll be bringing you a..

This is essentially a straight re-press of the 2008 Universal Deluxe Edition.
It comes with a lavish 28 page booklet with extensive sleeve notes by Tom Ewing and Jon Savage.
Disc one is the original Foxbase Alpha album whilst disc two gathers together 14 rare tracks from the era. If you’re a CD person and missed this the first time around – now’s your chance. Available to purchase from all good record shops and via the Saint Etienne webshop (click here) for immediate shipping – from this Thursday 27th October.

* The first 750 orders received come with a complimentary Foxbase Alpha carrier bag.
* All the items mentioned here plus a brand new range of Foxbase Alpha merchandise including T-Shits, Tea Mugs, Tote Bags and Tea Towls will be available from 5pm (UK time) this Thursday 27th October from our shop – click here

We’re recording a brand new album at the moment and will be bringing you news on that very soon. We’re also planning a couple of Christmas bashes so stay tuned via all the usual places!!