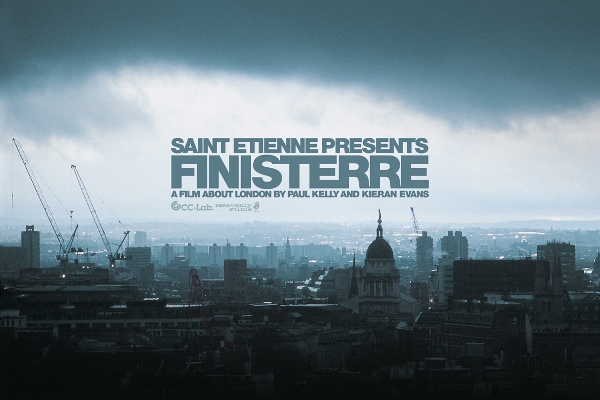 Join us at the Hackney Picture House in London for a special 10th anniversary screening of Finisterre on April the 4th.

Finisterre is a beautifully shot and edited homage to London, soundtracked by songs from the band’s album of the same name. Directed by Paul Kelly and Kieran Evans in collaboration with Saint Etienne the film explores the attraction of the city through interviews with artists, musicians and kindred spirits that have inspired the band over the years. The one hour film premiered at the onedotzero film festival in 2003 and will be re-issued later this summer by the BFI as part of a Saint Etienne London trilogy film set.

The evening starts at 8pm, the film will be accompanied by the rarely screened trio of films about London’s disappearing cafes – Today’s Special, the premiere of a new short Banksy’s London and two Q&A sessions: one with Bob, Pete and Sarah, another with Paul Kelly & Kieran Evans. Afterwards from 10.30 to midnight Bob and Pete will be Djing in the bar. Should be a great night, tickets are limited so book soon to avoid missing out.

This event is the first of a monthly club from Heavenly films. We’ll be bringing you some of our own material alongside rarely screened and much loved gems, with guest speakers and DJs. More news on the club soon but to stay up to date join our mailing list here, like our Facebook page here, or follow us on Twitter @heavenly_films.

Tweet
Back to the News page
← Kelly’s Locker – Rare CDs Found!
Nothing’s Too Good For The Common People: A Paul Kelly Retrospective →